LOS ANGELES (CN) – Tenants of a Los Angeles apartment complex who refused to pay huge rent spikes last year and were then served eviction notices scored a victory Thursday when they reached a settlement agreement with their landlord to stay in their homes.

On Thursday, the tenants signed a poster board representing their new contract terms in a symbolic ceremony. Their new deal knocked down rent increases from as high as 80 percent down to 5 percent annual increases and an immediate 14 percent increase.

Brothers Enrique and Luis Valdivia, both mariachis, played music for a cheering crowd with other mariachis. Sarahi Ramirez, 13, tore up protest signs that hung in several apartment windows that were put up last year.

Francisco Gonzalez has lived at the complex for 12 years and was surrounded by his neighbors on Thursday night in the complex parking lot.

“It’s a wonderful feeling and it’s hopeful for the next group of tenants, for the next building that faces something like this, where they don’t have rent control and they’re not sure what to do next,” Gonzalez said.

Attorneys with the Los Angeles Center for Community Law and Action said the eviction notices were retaliation by the property owner Frank “BJ” Turner. Tenants protested the rent hikes starting January 2017, when they learned Crescent Canyon Management, who represents Turner, purchased the property on East Second Street in Boyle Heights.

Tenants received 60-day eviction notices that said the owner of the property did not want to rent to the tenants after they refused to pay the new rates. Weeks later, several tenants received 3-day notices to pay their rent or get out. 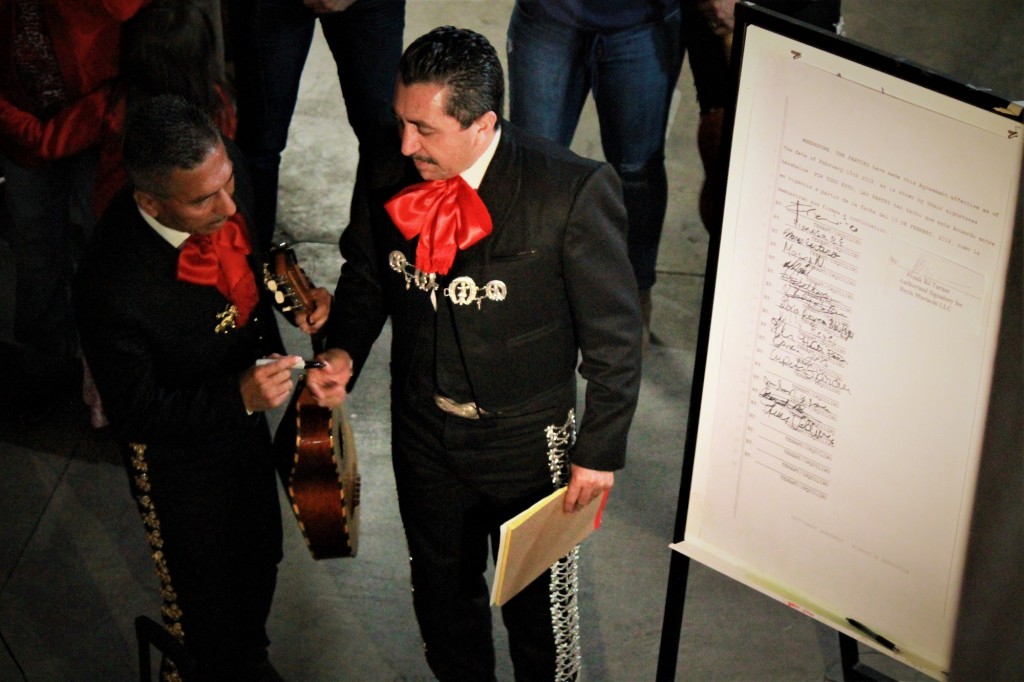 Luis and Enrique Valdivia join tenants at their Boyle Heights apartments on Feb. 15, 2018 where they signed a poster with the terms of a new contract with their landlord after a year-long fight to stay in their homes. (Nathan Solis, Courthouse News Service)

Last December, tenants who received the 3-day notices received support from about 70 people who appeared in eviction court in downtown Los Angeles.

The settlement reached on Thursday sets up mandatory collective bargaining between the tenants and Crescent Canyon Management.

“Often when tenants unionize, a landlord can pick them off one by one,” said Tyler Anderson, with the L.A. Center for Community Law and Action and attorney for the tenants. “But all the tenants remained in possession of their property, they stayed together. There have been abuses from landlords for a really long time. But particularly the pace and scale is different today. Investors are seeing a lot of profit in the ownership of properties in Los Angeles and particularly in East Los Angeles.”

Elizabeth Blaney from Union de Vecinos, a community support organization based in East Los Angeles, said a number of factors led to the settlement agreement, including a long history of community organizing in the neighborhood, assistance from the Los Angeles Tenants’ Union and tenants who were willing to fight back.

And the tenants even thanked their landlord.

“Because he was willing to come to the table,” said Blaney.

A phone call to Crescent Canyon Management for comment was not immediately returned.