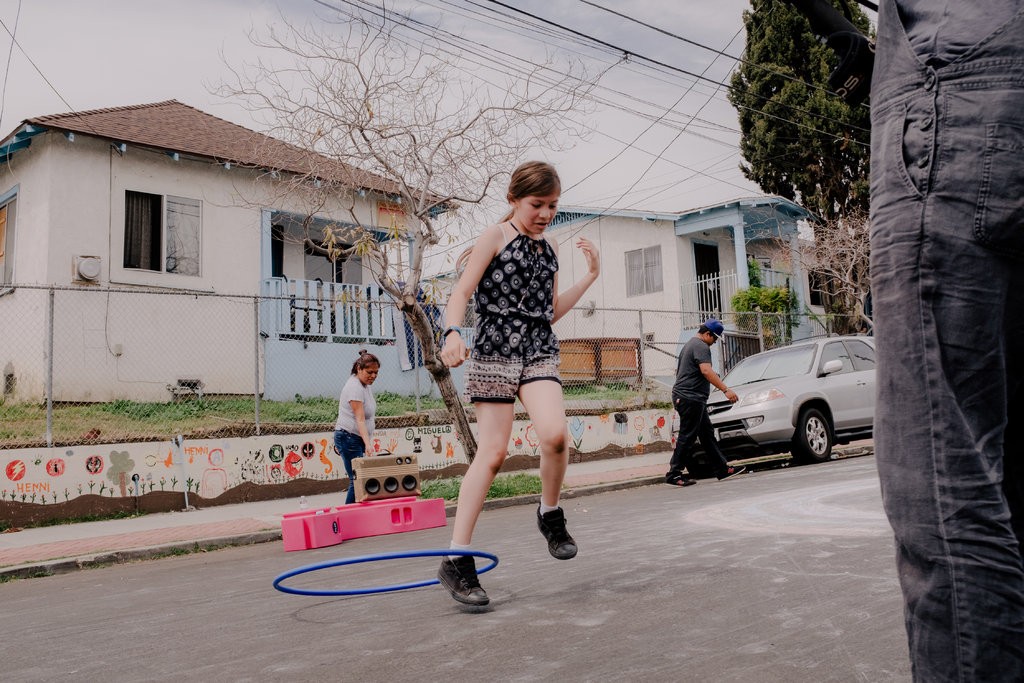 Fickett Street in Boyle Heights, a neighborhood in Los Angeles transformed into a one-day “play street” as part of a design initiative to reclaim streets for civic life. It was a collaboration with residents, activists, the nonprofit Kounkuey Design Initiative and the Los Angeles Department of Transportation.CreditColey Brown for The New York Times

LOS ANGELES — The temporary transformation of Fickett Street in Boyle Heights began with yellow shades resembling huge kites suspended over the sun-scorched asphalt. Soon, a thoroughfare known for its speeding vehicles and gang activity became something else entirely — a “play street” in which women gathered for Lotería, or Mexican bingo, and kids fashioned seesaws out of giant snap-together plastic shapes in colors inspired by local Mexican-American murals.

There are roughly 7,500 miles of streets in Los Angeles, and Fickett Street is only one of them. But in this predominantly Latino neighborhood where parks are scarce, residents and activists have begun a design intervention to reclaim streets for civic life, kibitzing and play. From London to Los Angeles, the play street concept, known as “playing out” in England, has become an international movement of sorts, especially in low-income communities that lack green space and other amenities.

The efforts in Boyle Heights, a 6 ½-mile area bisected by six freeways, is a collaboration between Union de Vecinos, a group of neighborhood leaders, and the Kounkuey Design Initiative, or KDI, a nonprofit public interest design firm that helps underserved communities realize ideas for productive public spaces.

The Los Angeles Department of Transportation has invested $300,000 on 15 KDI-designed pilot play streets this year in Boyle Heights and Koreatown, another heavily trafficked neighborhood. Seleta Reynolds, the general manager of the LADOT, first became aware of the concept while visiting Copenhagen. 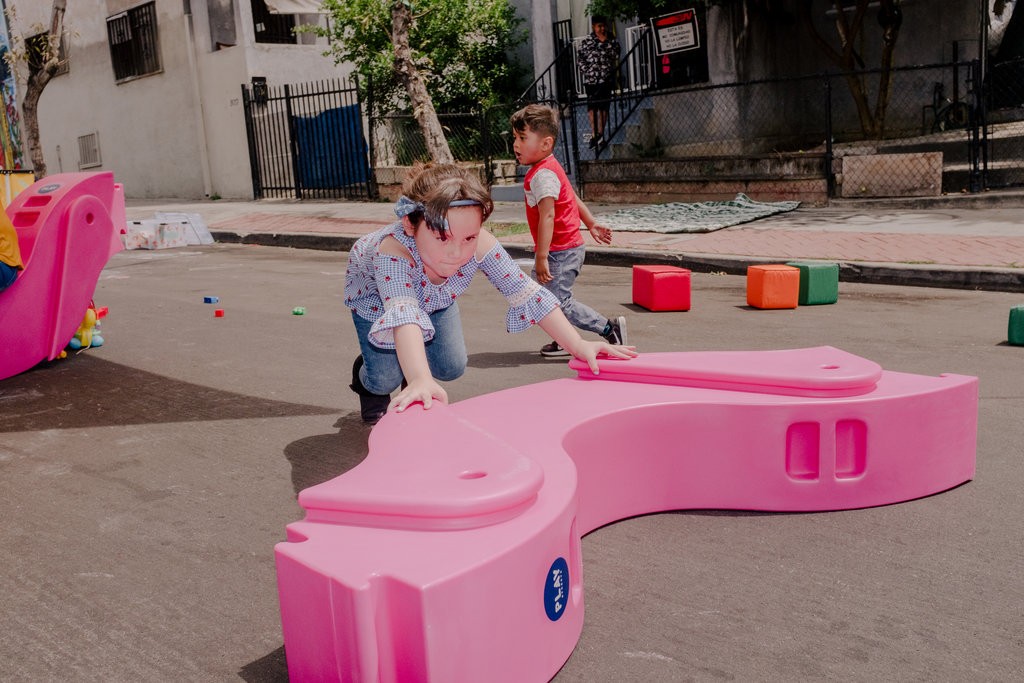 “I was struck by the power of these interventions,” she said. “There is something irresistible about being in the middle of a place — a street — where you’re normally not allowed to go.”

On a recent Sunday, Kounkuey unveiled its “playground in a box.” Shade structures stretched across Fickett Street, affixed to loquat trees and no-parking signs, and the plastic “wobbles” created by KDI doubled as Tilt-a-Whirls, BarcaLoungers, and formidable hurdles for teenage skateboarders. Nine-year-old Amanda Alvarado built a McMansion. “Ava, lookit!” she exclaimed to her 4-year-old sidekick in pink pom-pom slippers.

The Fickett Street play street, the neighborhood’s fourth since the LADOT pilots began in 2016, was sought by Union de Vecinos as a safe and celebratory refuge. Perched on a bluff overlooking downtown and separated by the Los Angeles River, Boyle Heights, a neighborhood of about 100,000 residents, has long suffered from a host of land-use inequities, including its proximity to polluting freeways that decimated housing and sliced the community’s largest park in half.

Three-quarters of the housing units in Boyle Heights are currently rentals. And the fact that the neighborhood is near the downtown Arts District across the river has brought the issue of displacement to the fore. Art galleries and house flippers have moved in and longtime tenants have received eviction notices, raising the specter of “Ikea catalogs in the barrio,” as Josefina López, the artistic director of Casa 0101 Theater and the writer of “Real Women Have Curves,” put it. 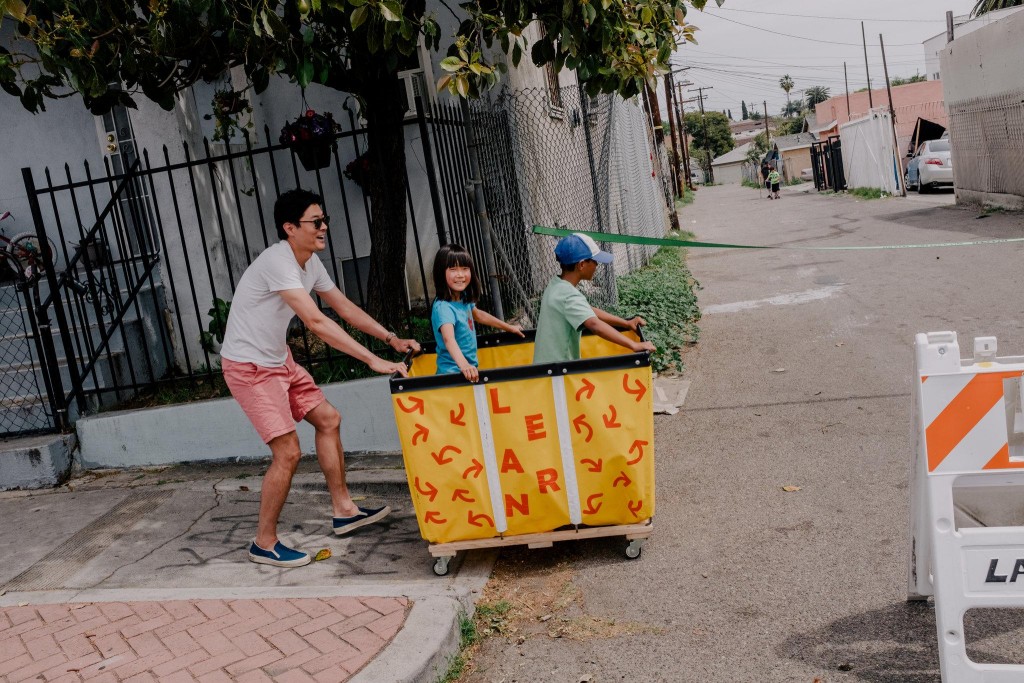 Children take a ride during a play streets event earlier this month.CreditColey Brown for The New York Times.

In her play “Hipsteria,” Ms. López imagined the last building in Boyle Heights 20 years hence, occupied by hipsters wanting to turn it into a dog hotel. “Boyle Heights is not a blank canvas,” she observed. “It’s a rich tapestry of immigrant history, culture and activism.”

It has long been an immigrant hub: The historic Breed Street Shul was the oldest Orthodox synagogue west of Chicago. (The rear building is now a community center.) The neighborhood’s landscape is distinctly Latino, with artful front-yard altars dedicated to the Virgin of Guadalupe and Mexican-American murals bringing vibrant life to peeling walls.

In recent years, Union de Vecinos has been deeply involved in pro-tenant and antigallery activism, some of it confrontational. (Several galleries, including the artist-run 356 Mission, have announced they will close here.) But over the past two decades, its leaders have also worked hard to make the neighborhood cleaner and safer in the face of longstanding disinvestment. The alleyways crisscrossing the neighborhood were especially dangerous, filled with trash by people pulling off the freeways to dump construction waste, and had become magnets for illegal activity.

The group got rid of the litter and gang graffiti, installed brightly painted speed bumps and, in an alley near a liquor store, planted a garden full of spiky cactuses. 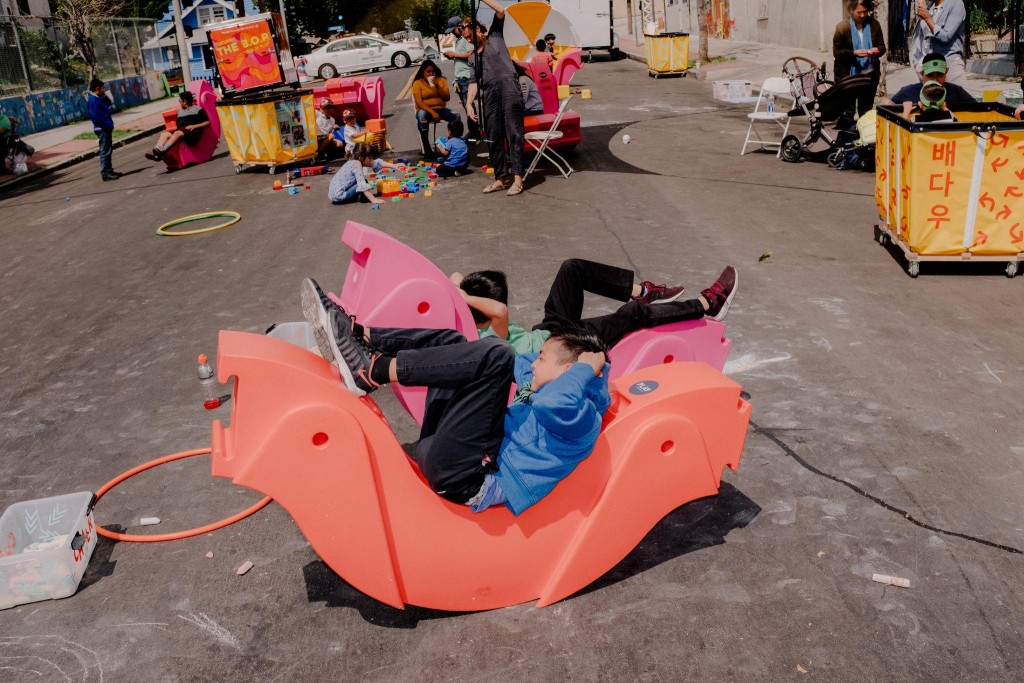 But improving the neighborhood has become a delicate proposition. As the area becomes more habitable for residents, it grows more appealing to outsiders, putting more pressure on housing. On Avenue Cesar E. Chavez, the primary commercial street, for instance, young people with laptops and earbuds sip coffee across the street from a lone Norteño accordionist in a sombrero standing beneath a red awning.

“There’s a difference between making something beautiful to sell it and making it useful,” said Leonardo Vilchis, co-director of Union de Vecinos. “So the question is, can we make this place more livable for people living here now?”

With tensions about gentrification running high, the community’s decision to embrace the play street concept was not a casual one.

“So many people want to come in and modify this place,” said Ofelia Platon, 45, a Union de Vecinos leader who lives around the corner from Fickett Street. “So there’s always a question of what would we need to give up?” A mother of three, she recalled taking her son Esteban, now 17, to a nearby park and having to drop on the grass because of a shooting. 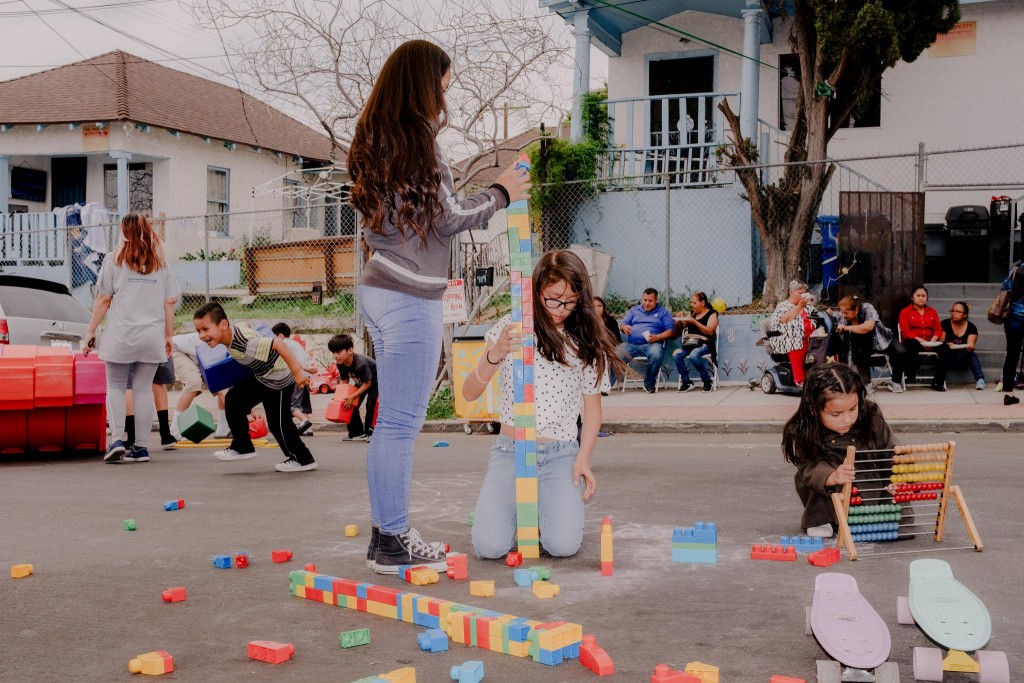 The play street concept, known as “playing out” in England, has become an international movement of sorts.Credit: Coley Brown for The New York Times

The residents chose Fickett Street with the intention of providing a safe space not just for children but for the community, said Chelina Odbert, KDI’s co-founder and executive director.

“What a play street is not is a replacement for permanent parks,” she said. “But it bridges the gap in a way that’s really needed.”

Scarlett De Leon, a director for the Koreatown Immigrant Workers Alliance, grew up there and said she spent much of her childhood glued to television, a pattern she now observes in her younger siblings and her great-grandmother.

“It’s a cycle that affects different generations in one family,” she said. “So having a space to be creative and interact is important for emotional health.”

At the play street event earlier this month, Fickett Street was alive with fathers pushing play bins down the street with children riding in them. The scent of taquitos drifted from Maria Lopez’s kitchen — she made enough for everyone — and young men helped carry jars of watermelon agua fresca down the steps.

Miguel Ángel Jiménez, 18, attempted to jump a wobble with his skateboard. “I feel better when people are interested in each other,” he said of the street. “There’s a time to be indoors and a time to be out.”