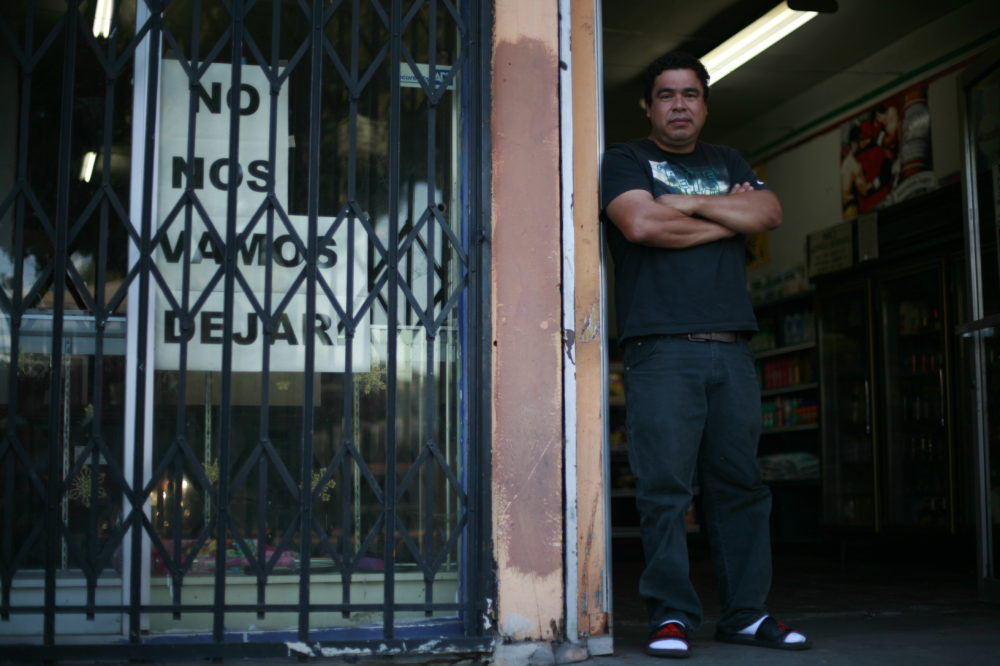 Miguel Ramirez, co-owner of the first-floor OK Market (also known as Edy’s Market) in the Hollins building in Boyle Heights, says he and his sister Maria are determined to fight to keep their store. New building owner, Brian Neman, has raised their rent and other tenants in the building. Photo by Luis Rivas

Pick between two of your children or your apartment.

This is essentially what their new landlord, Brian Neman, told Elvira Barrales and her husband in a notice in early May. The Zavaleta-Barrales family was told that they had too many tenants living in their home of 16 years and that two of her four children would have to go or they would all be evicted.

But notices like the one received by the Zavaleta-Barrales family are just the tip of the iceberg at the Hollins building – a building with 19 residential and 3 commercial units. Other tenants in the building have also received either direct or indirect messages since the new owner took over the building in February – such as offering tenants money to simply turn in their keys and move out, known as “cash for keys.”

Maria Ramirez, co-owner of OK Market (also known as Edy’s Market) on the first floor of the Hollins building, says that for the past few months, she and her brother Miguel have been receiving almost daily visits to the store from the new owners. But they aren’t there to see them.

Rather, their visits are always accompanied by prospective new tenants. As a matter of fact, Maria and Miguel Ramirez who have been leasing the space since 2007 were surprised to learn recently that they are on a month-to-month lease and can be asked to vacate at any moment.

“Where are we supposed to go with our investment?” Maria asks.

Their investment includes about $7,000 worth of refrigerators, display cases, merchandise and their labor of love for the past nine years. At the beginning of the month, they saw their former neighbors, a live-work artisan woodworking studio, throw in the towel when they were told their rent would increase from $1,700 to $3,500 a month.

“I would have liked for them to stay and fight with us, but they could afford to leave,” Maria exclaims. “We have nowhere to go.”

That’s why the Hollins tenants have reached out to Union de Vecinos, a community organization “founded in 1996 to fight against the demolition of the Pico Aliso Public Housing projects.” Union de Vecinos has been linking up the tenants who want to fight with legal resources to fight their imminent evictions, their housing conditions, but more importantly, they stressed, they are helping the tenants organize themselves. Because this matter is bigger than just a few tenants being displaced. It is tied to the demolition of the 6th Street Viaduct and larger gentrification trends. So, the strategy will be legal as well as political.

The new landlord says he actually already has new tenants for their space and has brought them in to take measurements. He didn’t tell the proprietors of the market directly because they don’t speak English but Maria showed me a video she took clandestinely of the prospective tenants, two young artists of color. Maria says that one of the saddest parts is that they have been asking for repairs to the store infrastructure since they moved in, but now that they are being kicked out is when the space will most likely be remodeled for the next tenants.

One resident so far has signed a contract agreeing to leave within two months in exchange for two months of free rent. He says that he felt pressured to sign it because he would get daily visits from the property manager, Pepe, to sign it. The notices, written in English, were unintelligible to him.

Tenant organizers with Union de Vecinos say that these are standard practices for landlords and realtors who want to make higher profits off their property. And, unfortunately, due to the remodeling of the 6th Street Viaduct just a block away from the Hollins building, this area is effectively ground zero for displacement.

The practice of radically changing the tenants in the building to bring in higher profits has come to be known as “re-tenanting”. Elsewhere in the city, in Highland Park and Frogtown for example, this process has led to drastic displacement of tenants and small business owners. Speaking about re-tenanting in an interview for Marketplace, real estate agent Nicole Deflorian said, “I do feel bad. But it is a business. And when these people are paying under-market rents, and we have a client that owns the property, we have to look out for our client’s best interest.”

The Hollins building is regulated by city policies of rent control, a measure that Union de Vecinos believe is key to retaining affordable housing in the city. It has been under attack by landlords and realtors for some time now because rent control prohibits landlords from raising rent more than a 5% per year.

A Hollins building resident, who will remain anonymous out of consideration for potential reprisal from the landlord, knows he may be evicted to make room for tenants who can afford to pay higher rent. He has been paying less than $500 a month for his studio apartment.

“But if he knew that we were paying so little, why would he buy the building?” asks the tenant.

Another resident recalls that when he moved in with two of his friends, they paid $175. Now they are being asked to pay triple their rent because of the amount of occupants.

But Maria Ramirez is optimistic that more of her neighbors will join them in fighting this. And with the help of Union de Vecinos, they are getting organized and looking into legal recourse.

Miguel Ramirez said he, like his sister, is also ready and determined to fight to keep their store. He said Neman’s regular visits to the Hollins building have changed. Neman no longer comes in and shows off the property irrespective of him and his sister. He thinks it’s because of all the support they and the tenants of the building have been receiving from Union de Vecinos and other concerned Boyle Heights residents.

Maria Ramirez, Barrales, several of their neighbors and organizers from Union de Vecinos recently met with two attorneys from Inner City Law Center. Though they have not yet retained any attorneys, they are in the process of speaking with legal experts about their rights in this case. And they are prepared to take it to court. At the meeting, residents also brought up other issues in the building aside from the higher rents and pressures to leave. Among the issues, tenants say, are bed bugs, other pests and infrastructural issues.

As of May 31, according to Union de Vecinos’ social media page, the Zavaleta-Barrales family had won their case and successfully beat their eviction.

Despite this small victory, the fight continues for residents at the Hollins building. If you are interested in more information or want to get involved, contact Elizabeth from Union de Vecinos at (323) 816-4961.